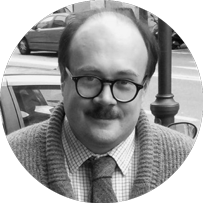 Giovanni Damiani graduated in Architecture with honors from IUAV (Istituto Universitario di Architettura di Venezia) in Venice, Italy, where he also attended a doctorate research program at the Department of History.

He is currently teaching Theory of Contemporary Design at the School of Architecture in Trieste and a European Cities course at Kent State University, Florence program. He collaborates and carries out research projects in History of Contemporary Architecture at the Politecnico di Milano and in Urban Plannin at the Politecnico di Torino. He holds seminars and conferences in many Italian and North American Universities and institutions, among which Columbia University, Harvard University, Getty Center, Université de Montreal, and the Canadian Centre for Architecture (CCA). He has published articles and essays in catalogues, magazines and various books. He translated into Italian (with Ruben Baiocco) Bernard Tschumi’s book Architecture and Disjunction. He is currently working on a monographic study on Elia Zenghelis for Skira publisher in Milan.